General Secretaries of CEVAA and UEM in discussion

General Secretaries of CEVAA and UEM in discussion

The General Secretaries of Community of Churches in Mission (CEVAA), Council for World Mission (CWM), and United Evangelical Mission (UEM) conducted a successful meeting from 8-9 March 2022 in Singapore. Organised by CWM, this was the first meeting of Rev. Célestin Kiki (CEVAA), Rev. Dr Jooseop Keum (CWM) and Rev. Volker Martin Dally (UEM) since the beginning of the pandemic in 2020. The two days were a time of biblical reflection, open discussion, fellowship and mutual encouragement as they shared news and information, and strategised over possible joint mission activities. Among the matters in common they conversed on was their shared, grave concern about the Ukraine invasion, which is one of the largest wars in Europe in 80 years, and this gathering was an opportune time for them to join in prayer for peace.

UEM, CEVAA, and CWM share similar roots and purpose as a partnership of Protestant faith communities around the world. Over the years, these three mission organisations have actively pursued paradigm shifts to become modern, international mission organisations committed to equal rights of membership, a round table model of decision-making processes, and equality in resource-sharing regardless of geographical location and numerical strength.

Rev. Dally addressed CWM staff during their weekly virtual devotions on the topic “Called into Discipleship for leaving trodden paths”, where he spoke about the paradigm shift needed to take a risk and leave well-established paths of doing mission.

Following two sessions of discussions on 8 March, their programme included a video interview where they spoke about the changing role of missional organisations and approach to mission in the past few years; the role of women in member churches; and their thoughts on vaccine injustices.

Responding to the question on how the approach to mission had changed in the past three years of pandemic, Rev. Kiki highlighted the solidarity among member churches in Europe, especially France where they developed churches in homes, or “home churches” to continue with worship. In the African context, churches grew to adapt to or adopt new technology, making radio and broadcast of church services and information more prevalent. Besides familiarising themselves with YouTube, pastors were more connected to their church members as they made more frequent home visits.

Echoing some of Rev. Kiki’s points, Rev. Dally emphasized that the pandemic had accelerated the transition of German churches to using another messaging platform, WhatsApp in their relationships with member churches in Asia and Africa. Their pre-pandemic complaints of unanswered emails dwindled, as they adopted the use of social media to communicate with their brothers and sisters in Asia and Africa.

As this video interview coincided with International Women’s Day, Rev. Kiki shared that the role of women has already been integrated into both CEVAA and member churches, while Rev. Dally elaborated on practical steps taken towards equipping women for ministry and leadership in member churches, gradually shifting in the direction of gender equality.

Rev. Kiki stressed that women leadership is already a reality, in Maohi Protestant Church, New Caledonia, and some churches in Africa, while a former CEVAA President and his immediate successor are both women. He also called attention to a CEVAA prayer event organised the week before in honour of International Women’s Day.

Working within the confines of its influence on member churches, which are mostly independent churches, the UEM General Secretary spoke about their scholarships as a viable way to encourage gender balance, as it is stipulated that churches have to endorse a woman for a scholarship before they can endorse a man for the next scholarship. With this alternating arrangement, they have almost reached a balance – out of 80 scholarships, 38 were for women.

Prior to this video interview, the General Secretaries had articulated how the prolonged pandemic has brought about immense suffering and extensive damage worldwide, and they concluded the interview by voicing their thoughts on vaccine injustices. The UEM General Secretary had called for a just distribution as well as the lifting of patent regulations on the vaccines so that other countries can produce these vaccines locally, while the CEVAA General Secretary acknowledged the fear of vaccination that many people in Africa have, and spoke about CEVAA’s financial assistance to subsidise vaccines in church hospitals in Lesotho, Zambia, Rwanda, Cameroon, Ghana, and Ivory Coast.

During the second day of meetings, the General Secretaries visited the CWM General Secretariat office, and a presentation on “Mission in the Context of Covid-19 Pandemic” was delivered. Overall, the entire meeting went smoothly as planned, and it was well-received by CWM’s distinguished guests. CWM Launch of the Onesimus Project The Onesimus Project: A Message by Rev. Dr Roderick Hewitt 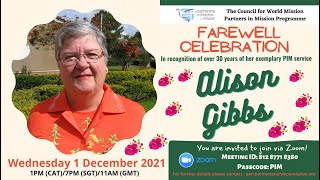